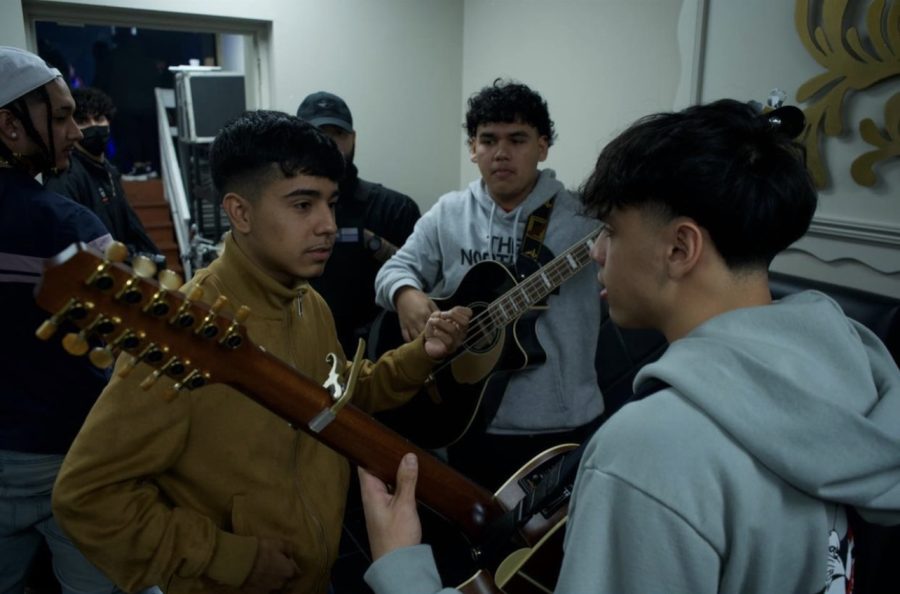 Senior Johaan Salgado alongside Ivan Cornejo before his show at V Live.

On his first day of high school, now-senior Johaan Salgado’s mother drove him to WEGO. He remembers, “My brother was with me since he was not driving at the time also. He was a sophomore. I remember I was wearing a nice red Polo Ralph Lauren polo shirt. My first day was definitely weird, since we had an assembly the first day, and I kept getting lost. It was like going into a strange environment.”

Since that day, a good deal has changed for Salgado.

“I was a completely different person back then. I didn’t know anyone, so I would feel really secluded since there were so many people there. I didn’t even know who to talk to. I am definitely more outgoing now” said Salgado of his first day.

Salgado has subsequently made a name for himself in music, uploading videos of himself playing guitar to TikTok and Instagram, which led attracted the attention of many influential musicians. In January, he played alongside singer Ivan Cornejo, and now, he looks forward to playing guitar on Saturday, June 25 in Los Angeles, California, at the “Viva L.A.” festival alongside Latin band Los Aptos.

Johaan plans to continue his music career after high school.“I am very proud of all the hard work and dedication Johaan has put into what he does and I am very excited to see what the future has for him,” said older brother Javier Salgado of Johaan’s accomplishments.

“Music has impacted me so much, since I am doing what I love, and it also supports me financially. It also gave me a stronger relationship with my mom because when I first started going to gigs, she would always come with me. There was never a gig she missed,” said Salgado.

He explained that he also admired Danny Felix, a regional Mexican musician highly regarded in the industry.

“Throughout my whole career, a lot of the inspiration I got was from him. Still, to this day, I can distinguish his guitar playing from anyone else, and it really inspires me because I want people to be able to hear my music and know that that is me playing just by hearing it.”

As he reflected on his 4 years at West Chicago Community High School, Salgado said, “The best piece of advice I can give incoming freshmen is to be prepared, be prepared, work-wise and social wise because when you come into high school you can meet people who are not the right group for you and even people that will inspire you to do better in life. Don’t EVER change yourself to be a people pleaser because, at the end of the day, you should only do what makes you happy.”

Thank you for your donation! We are so grateful for your support, both as a reader and a donator.