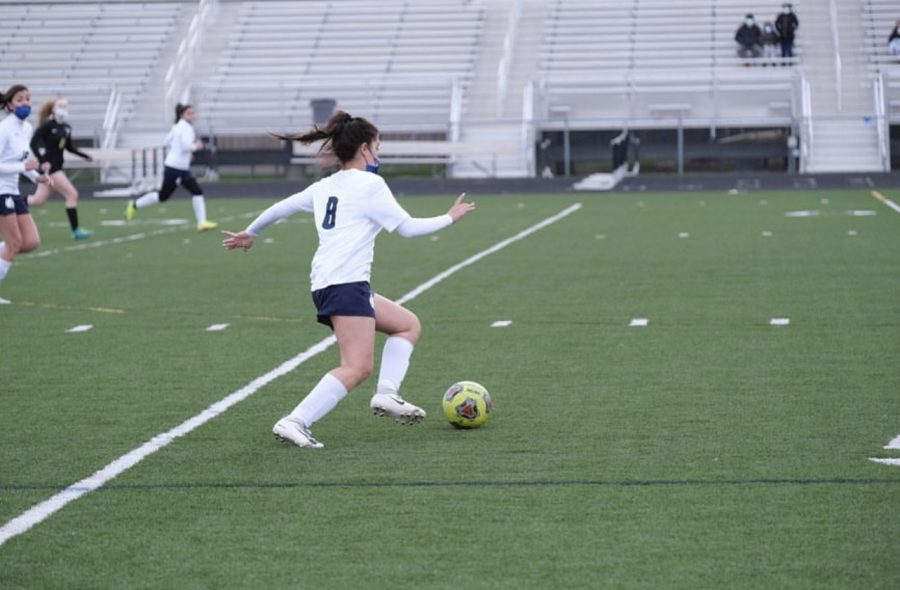 Senior Melissa Pani during one of her last soccer games as a student at WCCHS; Pani was team captain her final year of high school.

Heading into freshman year, now-senior Melissa Pani worried that the seniors would harass the incoming students.

“I remember being told a rumor that freshmen get pennies thrown at them. I was so scared that I would be walking around getting pennies thrown at me… I can promise that that does not actually happen,” said Pani.

“I also remember wearing a nice outfit that I had laid out on my bed, my mom used to take me shopping a couple of days before school so I would have a brand-new set of pants and shoes so I could look fresh.”

Pani strived to achieve high marks academically throughout high school, even earning membership in National Honor Society (NHS). She was also involved in volunteer work, and captain of the girls’ Varsity soccer team her senior year.

“I’ve been playing soccer for nine years, and plan on playing in college, but originally, I didn’t want to. I feel like a big accomplishment I’ve made was becoming the team captain,” said Pani.

After high school, Pani plans to attend Olivet Nazarene University, hoping to major in biology/pre-med, and eventually go to nursing school. She genuinely cares for her fellow classmates, and wants to help those in need.

“I feel like I am a genuinely good person, and I am outgoing. I try my hardest to make sure people can fit in,” said Pani.

Senior Daniel Zlataric said, “I have noticed that she likes to include everyone, especially when she sees people being left out of a conversation or even in class.”

As Pani now says goodbye to West Chicago Community High School, she offered up the following advice to incoming freshmen: “Enjoy your time in school. It goes by way faster than you would expect.”

Thank you for your donation! We are so grateful for your support, both as a reader and a donator.