Wrestling teams rumble their way into final meets of the season 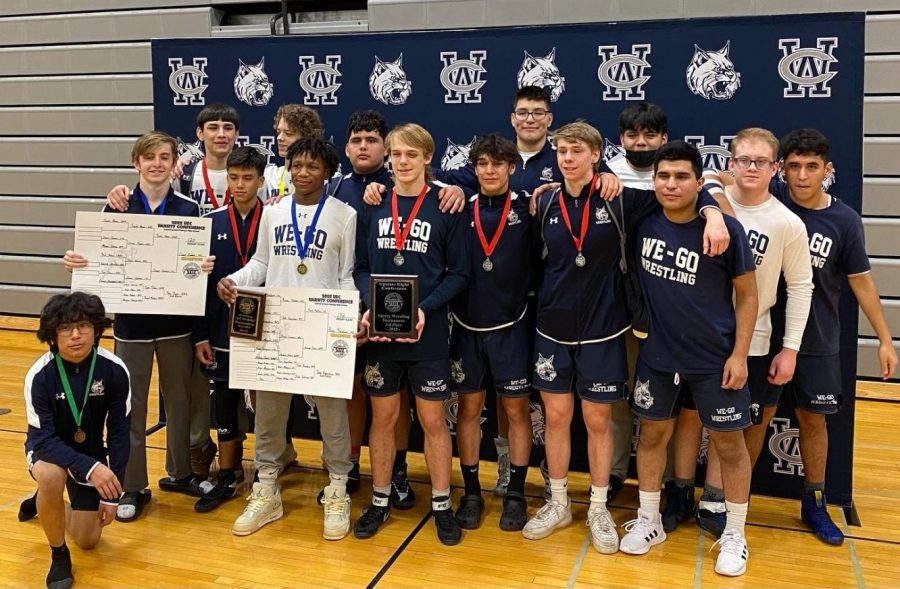 By Daniel Kuriakose and Chuck Baumgartner

The team wrapped up a successful regular season on January 22 at the Upstate Eight Championship tournament at West Chicago Community High School, where they earned third place.

The fact that WEGO hosted the tournament this year was significant. As senior James Losacco said, “It only happens every nine years because it rotates around.”

Team captain Baldwin said, “This year, I’ve really enjoyed being a good leader/captain, helping my teammates achieve their goals, and the great experience of bonding with my team, coaches, supporters, and teachers.”

Wrestling has encouraged Baldwin to enjoy being a leader while helping out his teammates achieve their goals. The experience he gained along the way has changed him in a good way, as it has so many other athletes on the team.

Alvarado (106 lbs.), placed seventh in the December 5 tournament and the top 10 at the meet on November 26-27. He was also the only team member to place at the JV meet against Bolingbrook on January 8, where he placed second.

“I really enjoyed seeing the improvement of the team, from the hard work that we have been putting in from start of [the] season, and continue to do in order to prepare for regionals,” said Alvarado.

Other team members performed well during the regular season, including:

Connor Zentner (120 lbs.) had a second-place finish at the Ewoldt tournament on December 29 and also placed in the top 10 at the Barrington tournament at the end of November.

Dupasquier (145 lbs.) took fifth at the Batavia Invitational on January 15. He placed fourth at the Ewoldt tournament on December 29, seventh in his weight class at the December 5 tournament at Joliet Central, and in the top 10 at the two-day tournament in Barrington.

Dupasquier believes that the team has had a good season. He is also excited for the new freshmen who joined this year and explained that will help continue the program for future years.

The freshmen will have to work hard to compete at the Varsity level. Coach Steve Brown said,” I would describe the team this year as tough and hard-working.”

For now, the team is focused on performing well at Sectionals, and hopefully placing at State. Brown considers the team as tough and hard-working. They have been training daily for the upcoming tournament, in which the athletes have to place in the top 3 to continue to the next section. According to Brown, the team has been watching films and working through situational training scenarios to prepare. The team hopes that they will place in regionals and finish their season off amazingly.

“Some of the strengths of our team are commitment to the sport (showing up every day, sometimes at 5:30 am, giving up Saturdays for tournaments), the will to improve, and strong bonds among the wrestlers,” said Brown.

The team has been working hard, and many of the new freshmen have performed well in their first year of high school wrestling. Students and staff are encouraged to support the team on February 5 at Wheaton North. 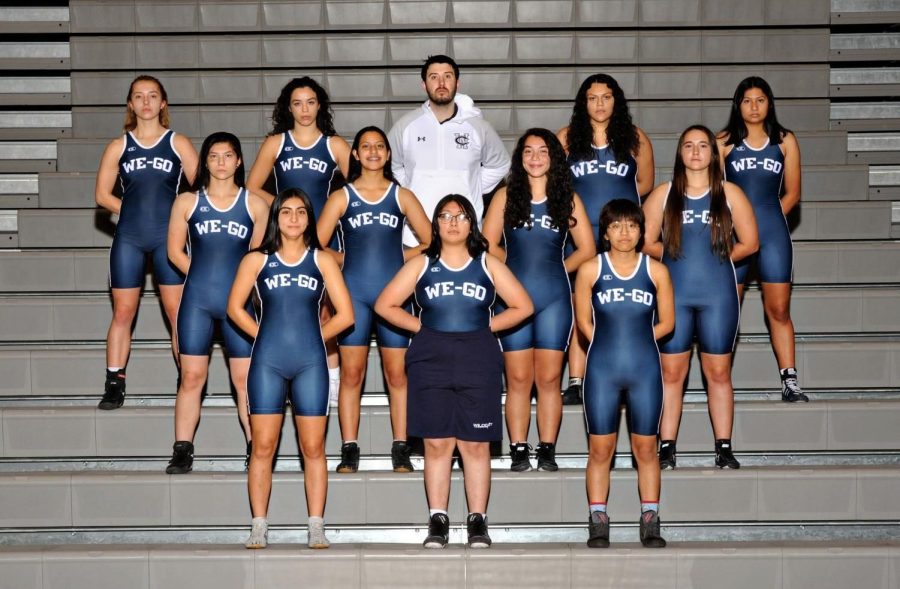 The girls’ wrestling team at West Chicago High School looks to place at the February 11 IHSA Sectional competition after their most recent match against Batavia High School was cancelled.

The team is wrapping up its first season, which began in October 2021, when coaches held an informational meeting to determine whether there was an interest in a female wrestling team. There were no tryouts held because most of the team members had been new to the sport.

“It is important we have a girls’ wrestling team because sports have been a male-dominated place for too long,” said senior Briceyda Vivaldo, who joined the team this year.

Once the team was assembled, daily practices were held for both the male and female teams in the wrestling room. Since there are few  schools locally to offer female wrestling programs, WEGO’s team had to travel some lengthier distances in order to compete, including to Oak Park and Ottawa.

The team started their season in a match against Oak Park/River Forest High Schools on December 3, and West Chicago Community High School also hosted invitational meets as the season continued.

“What it means to be a woman is changing, and these women are leaving behind the weak and dainty assumptions put upon them and showing their true potential in brute strength and skill on the mat with others who show the same enjoyment,” said senior Charlene Bahnfleth.

Bahnfleth is 19-9 this season; she placed first in her weight class (120 lbs.) at the Upstate Eight Conference championship, taking second place overall, and solidified fifth place at the Hoffman Estates Invite on January 15.

Senior Tania Cristobal has performed equally well this season: she took first place in her weight class (130 lbs.) at the UEC championship meet, and was the overall conference champion. She also placed fifth at the Hoffman Estates Invite.

Team captain and senior Maya Gomez tore her meniscus in December, just four matches into the season. She is still hoping to qualify for State in the coming weeks, but recovery has been slow.

Although the season has been filled with successes and setbacks, those who have watched the team understand is just the beginning of what this program is able to accomplish, and how far it will be able to expand in the future.

“Because it’s a male-dominant sport, the girls are able to prove to them that we can be at their level,” said Gomez.

The overall theme that has become important for all of these girls’ minds is the fact that just because this sport is male-dominated, does not mean that girls cannot participate and excel. As Gomez said, girls are able to learn very quickly, even if they have not had any experience in wrestling before. The strength and power that girls have for sports is present, which is what coaches and returning wrestlers have been noticing since early on in the females’ first wrestling season at West Chicago.

“With any first year program, it’s hard to know what to expect out of the gate. Until that first day of practice we didn’t even know how many girls we would even have, but we quickly saw that the interest and passion were there. Now it’s about taking the program and building it,” said Coach Mason Day.

Although this program has just begun, it seems to have created a real interest for the girls of WEGO. Seven athletes made the Varsity team this season;  It is clear how much one sport can mean to them in so many different ways.

The girls’ wrestling team is not only about building strength physically but also mentally, especially as one compares the athleticism of girls’ and boys’ sports.

“I believe that it is important that we have a girls’ wrestling team because sports have been a male dominated place for too long,” said Vivaldo.

The formation of the girls’ wrestling team has brought another opportunity for the girls of WEGO, and the succession of this program is just beginning.