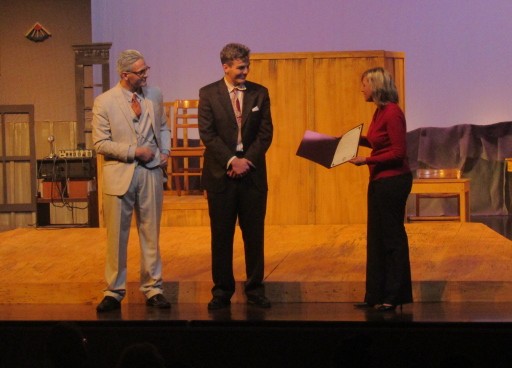 Those present on the first night of WeGo Drama’s “Inherit the Wind” were able to witness State Rep. Jeanne Ives recognizing WeGo Drama for their success.

Ives, who represents the 42nd state district, came on behalf of the 99th General Assembly of Illinois to honor WeGo Drama.

The recognition from the state is a great honor to those involved in WeGo Drama, yet awards are not why they continue to perform.

“It’s not about competition with us. For us, it’s just about doing good art that tells good stories,” WeGo Drama director Mark Begovich said. “Simply, we just want to be recognized for the good work that we do. These students work so hard. It’s not about awards or anything, it’s about sharing with our community.”

The past year has been successful for the program as they have received an invitation to perform in the world’s largest performing arts festival, the Edinburgh Fringe Festival, in Scotland in August. The official state recognition is just further proof of the program’s dedication to excel.

Sophomore Efrain Aguilar, who played Mr. Dunlap in “Inherit the Wind,” said, “We are very excited. (Begovich) pointed out that it’s a once in a lifetime opportunity so we make the best of it.”

The next WeGo Drama event is “It’s a Wonderful Life: a Radio Play” on Dec. 12.