The Wing brothers get dubs in soccer and in life 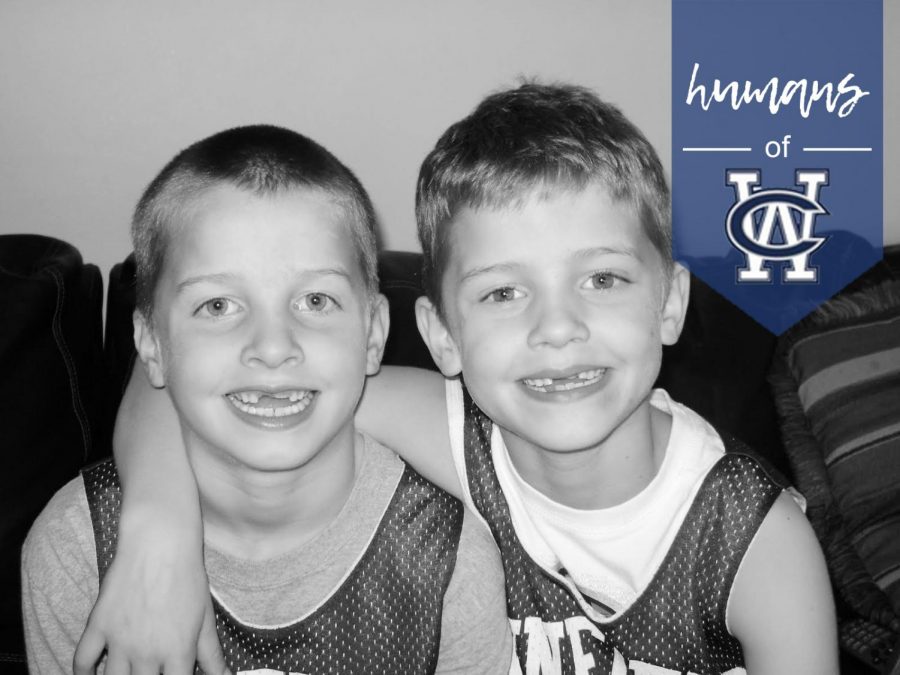 Collin (left) and Connor (right) Wing have always been close, according to their mother, Lisa Wing.

The Wing brothers, fraternal twins, are known throughout West Chicago Community High School for being the outlandish ones among their group of friends, and for constantly confusing teachers and students with their similar-sounding names and looks. Both brothers have the same hair color, but their eyes are strikingly different: Connor has hazel eyes, while Collin’s are a light teal color. They are also vastly different people.

As their friend since kindergarten, I have always thought of Collin as the smarter of the two, and Connor as the cooler of the two, but really, they are both intelligent and cool. When we were younger, we used to bike to “the gazebo” (at the center of town in Winfield) two or three times a week with fellow reporter Corey Brothers and others, to hang out, listen to music, and talk about our lives. The brothers are incredibly close, and share just about everything.

Lisa Wing, the twins’ mother, said, “Connor and Collin have been close buddies since they were babies. They’ve shared a room since birth (and before) and still do to this day. But they’ve always been very different in their personalities. Connor is very social and outgoing, willing to talk to anyone, anywhere, anytime…always the center of attention.  Collin is more quiet, low key, and often is fine sitting back and observing, eventually jumping in once he’s comfortable. It was much the same with soccer.  They started playing park district soccer at four years old and Connor was first out on the field. Collin wasn’t so sure at first, but by the third game he ran onto the field and has loved it ever since.”

That joy for soccer, sparked when they were young, has continued for 10 years. They started playing with SockersFC at the age of seven, and continue to play with that club today.

Collin explained, “It is a very competitive league. That’s like the highest level league that they have. Right now, we practice Monday, Thursday, and Saturday, Sunday, and on Sunday, we do futsal and then Euro League, which is against older men, like people in their forties. They push us to be better. It doesn’t matter if we lose, but it’s about how we play.”

The Wing brothers also made the WEGO team all four years of high school. This year, both Wings played on the school’s JV teams. Connor plays defense, while Collin plays forward, or, as he said, “I play the wing, which is also my last name…which is funny.”

Collin’s soccer coach, Daniel Ballines, explained, “I was Collin’s coach two years ago and again this year, and the biggest growth I saw was his development into being more of a well rounded player, which was evident this season when he led the team in both assists and goals.  More importantly, I saw his confidence in his ability grow over the past several years. Both on and off the field, Collin is a leader.  On the field he was always encouraging and motivating his teammates and off the field he led by example.”

Connor’s soccer coach, Jose Villa, also said, “There are many things that I have enjoyed about Connor. However, one thing that sticks out is his positive attitude and the way he can spread that and be contagious amongst his teammates. After a tough loss where everyone was down, Connor shared with the team that “it isn’t about one individual, we win as a team and we lose as a team”. This stuck out to me because it truly showed his leadership capabilities and the way he responded after a tough game and tough loss and it allowed us to see that he was keeping his head up and trying to spread that as well to his teammates.” 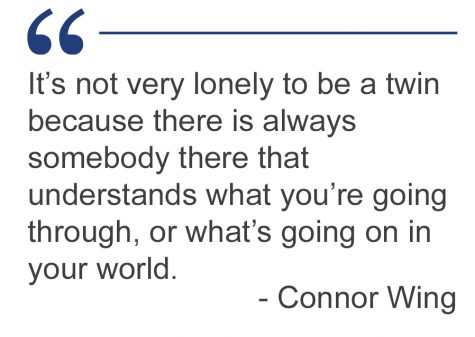 The Wings play soccer nearly every day during the fall season, when the high school team is in full session. Mom Lisa added, “Their commitment to soccer is strong, playing eleven months out of the year with only July off. Sometimes playing six to seven days a week with games and practices. They play in heat, cold, rain, wind and even a snow flurry. They’ve found a place to play on every vacation we’ve ever been on.  They even found a game in places like Peru, Greece, Costa Rica, and the Dominican Republic. Even if no one spoke the same language, if there was a ball and a field, Connor and Collin managed to get a game going.”

Interviewing the twins in the journalism lab on October 5, Collin displayed his love for the sport by wearing an Adidas hat with an Adidas sweater and Adidas sweatpants, while Connor sat to the right of me, wearing a black hat, Nike shirt, and jeans. We discussed what it is like being a twin.

Collin replied, “It has its ups and downs. Sometimes he is very annoying, but sometimes it is helpful to have someone there to help you.”

“It’s not very lonely to be a twin because there is always somebody there that understands what you’re going through, or what’s going on in your world. Sometimes it can be annoying because you don’t want them there, and there’s always someone there, but overall, it’s a good thing to have a twin,” Connor echoed.

While trying to remain focused on soccer and their studies, the Wings still have just enough time to also maintain a job and referee for youth soccer teams. Through their referee work, they have learned to “manage players of all ages, coaches and even parents and have done an excellent job in doing so,” said Lisa.

Both brothers reported they have just enough time to barely finish their schoolwork. In school, however, the brothers are enthusiastic participants.

While the brothers’ friend and senior Dylan Krupp was not available for comment, according to senior Johnny Burton, who is in Collin’s Enriched World Literature class, working with Collin “is funny. He’s  great, he’s chill and he’s very cultured regarding, like, games and TV shows except when he’s talking about Stewie Griffin.”

“He is a very respectable individual,” said senior Zach Smith of classmate Collin.

Senior Sarah Plumlee stated, “He’s usually got his head down due to him working so hard.”

“[Connor] gets the most work done out of everyone at this table,” added junior Isa Poulterer.

Soccer is not the only interest for these two however. Several years ago, they tried to get into wrestling, but stopped when they realized soccer was the right sport for them. Connor and Collin also started playing instruments when they were in seventh grade. Collin took up the tuba in the middle school band. His teacher let him try the mouthpiece, and Collin was intrigued to play. Connor, on the other hand, started playing the trumpet: the trumpet is loud, and he wanted to stand out, as he does in real life.

Connor said, “Playing an instrument sounded like fun, and the trumpet is a nice-sounding instrument. I stuck with it for a couple years, but then I just didn’t like it that much anymore, so I stuck with soccer.”

Although the brothers stopped participating in band at the end of middle school, both share a current interest in Juice Wrld’s music.

Collin is known for taking engineering classes, and is currently in technical drawing. He is also an avid parkour participant. “When I was five, my cousin was on a trampoline, doing backflips. I tried it, messed up, and my back hurt for a bit, but I wanted to keep trying. I started watching videos, and still occasionally I watch YouTube videos on Parkour. Just from watching them do it, I am able to learn how to do it – wherever I go, I try to at least do one thing. I learned how to do a back flip on the group recently. It’s still a little sketchy.” He usually practices at a playground, the gym or the trampoline park.

Connor is currently interested in physical therapy as a future career, and enjoys gaming.

They put in considerable hours, often closing the restaurant before heading home to complete their schoolwork.

English teacher Shannon Atkian-Sanchez had the opportunity to work with Connor when he was a freshman. She said, “I love Wing-Ding. He gave me a post-it note attached to a gift card for Chipotle.  I saved the note and still carry it in my wallet.  He is sweet, genuine, and has a really wonderful heart.  He cares deeply about others, and he really walks the walk of being kind.  I have his sister now, and she would disagree with this characterization, but Connor’s kindness has always moved me.  I don’t know that I have ever met another kid who was so willing to let down his walls to connect with others and see past surface differences.  He was a bright student, etc., but that is not what makes me appreciate him.  His kindness really rubbed off on me and encouraged me to be more reflective.  I would not be remotely surprised to see him grow up and be a teacher or some other care-taking profession.  He has a wonderful heart.”

Those sentiments were echoed by Collin’s favorite teacher, Brittany Nelson, from the World Language department: “Collin is one of the nicest, most hard-working people you’ll ever meet. He’s genuinely kind to everyone he comes across and he puts everything he has into reaching his goals. It was just as much a pleasure to teach him as to know him – he made the Spanish classroom a better place to be! We got to have lots of conversations about challenges and how to overcome them. He always maintained a positive attitude, and knew when to ask for help.  During class, he was more quiet, but when I could get Collin to crack a smile in class, I knew I was doing something right.”

In the future, Connor plans to attend College of DuPage for two years, then enroll at a university outside of Illinois. Collin hopes to go to an out-of-state college right after high school. They are both looking forward to playing soccer in college.

Looking toward the future, Coach Villa said, “My hope for Connor is continued success. He is a leader with a great attitude and mindset and is also a great student. I know that whatever it is that he decides to continue to do in the future, if he sets his mind to it and works the way he knows how to, he will accomplish it.” 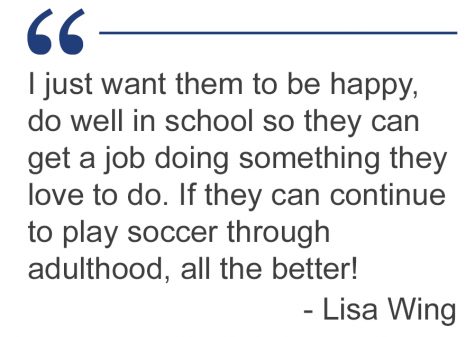 “After graduation, they both plan to go on to college and I hope they continue to play at some level. They’ve dedicated so much of their time to soccer over the last 14 years so I’d like them to be able to enjoy college life and still play the game they love. Playing club or intramural soccer in college would give the best balance, in my opinion, but I just want them to be happy with their choice, do well in school so they can get a job doing something they love to do. If they can continue to play soccer through adulthood, all the better!” stated Lisa.

The Wing twins are a bundle of energy and enthusiasm in everything that they do. They share their room, their car, their jobs, and hopefully not their toothbrushes. While these two are very similar in looks and names, it is important to note they are two different people with unique interests and future careers.