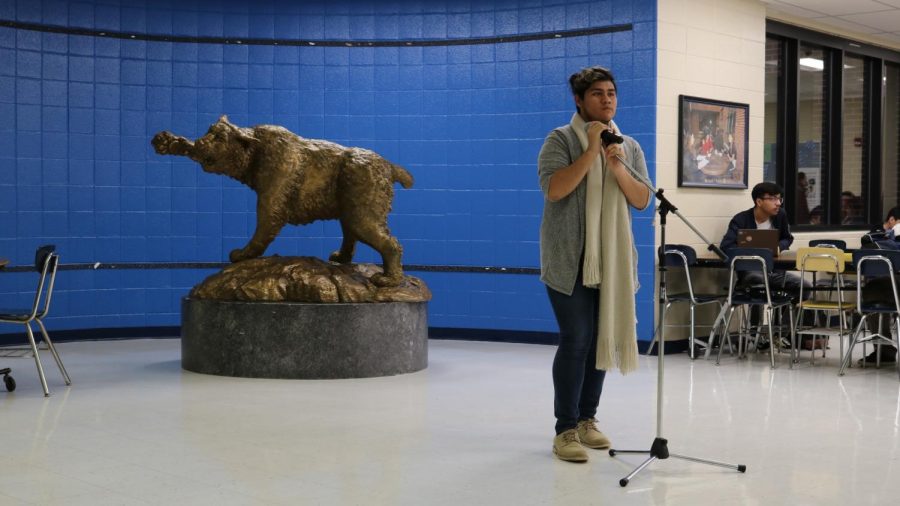 Senior Jimmy Quechol performs at the school for Tunes with the Cat in 2019.

From performing at schools and talent shows, senior Jimmy Quechol will get the opportunity to perform at Premios Lo Nuestro as well as publish two books this year.

Quechol found out about performing at Premios Lo Nuestro, a Spanish award show that honors Latin music presented by Univision, in early January.

“They contacted me on Jan. 7 while at TCD. They had told me that they tried contacting me through my ex-manager Jose until they got my phone number,” Quechol said. “They explained I was invited to attend the award show and if I would agree there was a free spot to perform right before the red carpet special.”

Quechol will be the first male artist under 21 to be performing at the red carpet.

Quechol was discovered by his YouTube channel where he posts covers and original songs.

“Since I was little I always wanted to be in the spotlight in music and dance,” Quechol said. “Something weird (is that) none of my family members are interested in music.”

Although Quechol will be performing in front of a big crowd at the red carpet, Quechol isn’t nervous.

“I’ve been around a big audience, but it’s such an honor. I’ve come from nothing and I’ve been struggling with my music because I’m not your typical artist,” Quechol said.

Premios Lo Nuestro will be presented by Univision on Feb. 21 in Miami, Florida.

While discovering his affection for music, Quechol went through hardships that inspired him to write his autobiographies “Behind Closed Doors” and “No More Lies” that will be self-published.

“Around my whole career, I’ve been victim of many rumors and many lies. Rumors were of who I’ve dated, who I was with and all which cause many issues in my current relationship.

Others were accusing me of things that I supposedly said and those rumors caused me a lot of friendships,” Quechol said.

By publishing books, Quechol hopes to show a different side.

“I just wanted to clear those things out and wanted to let people know who I really am. I will show the other side of Jimmy, the vulnerable side that a lot of people haven’t seen, but also the stronger side,” Quechol said.

Quechol began his career four years ago and shares a message from his book.

“I would like to address more people who hide away, scared to be who they are. Because most of them, I’ve gone through them and I never had someone I could go to hear this advice from and I would like to be some influencer for them to speak out, be yourself, be motivated,” Quechol said. “I never had that and nobody supported me and I want them to feel like I’m supporting them in a way.”

“Behind Closed Doors” and Quechol’s album will be published May 31.  “No More Lies” does not have a scheduled publishing date.