Boys varsity soccer brings a work ethic to their wins 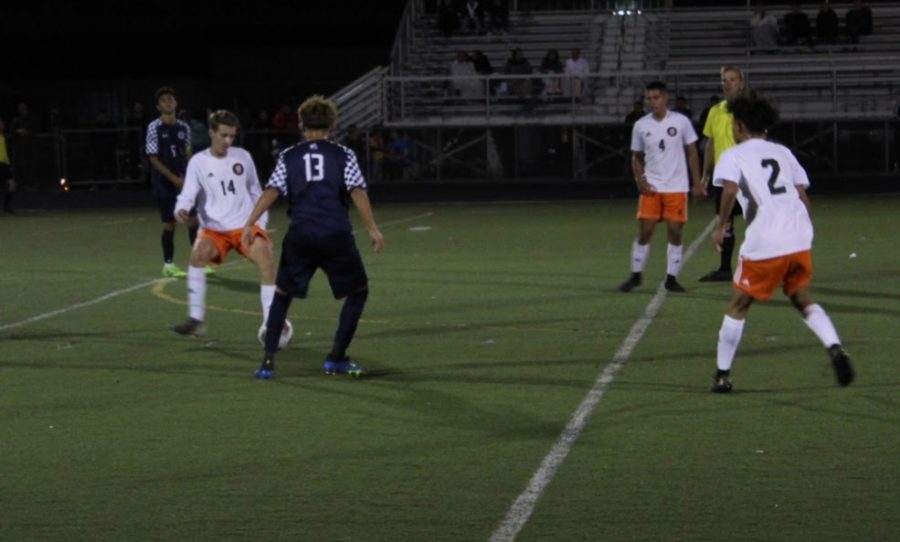 Senior Brayam Barrios defends the ball against Dekalb on Tuesday.

Boys soccer is rolling over opponents with their strong work ethic and teamwork.

Coach Jose Villa looks toward the work ethic the boys bring to the field as the reason for their success.

“I think it’s because of their work ethic. They’re out here working for each other and really putting in the work at practice and transferring that into their games,” Villa said. “These guys are extremely technical and skillful. They have heart, effort, and amazing team chemistry.”

“We’re working as a team and once we see problems we try to solve them during the second half. We just do what we do best and attack the spaces they give us,” Cadena said.

Assistant coach Dorian Carrasco thinks the team’s experience working together has helped the team be strong this year.

“We’ve seen an undefeated season since the summer. We knew the players we’ve been working with more than anything. A lot of our players have been in this program for the last 3 years and we also added some new players, which has made our team even stronger,” Carrasco said before the 1-0 loss to St. Patrick Sept. 21.

The difference between the seniors from last year and this year is one reason co-captain senior Alonso Salinas believes the team is doing so well.

“There is a huge difference from last year’s season to this current season. I feel like it is all in the hands of the seniors. Last year seniors weren’t really that motivated to succeed and they didn’t have goals,” Salinas said. “I feel like this year we, the seniors, know that we want to win state and that’s why we are doing so well. We have our goals written down and we are going to do whatever it takes to get there.”

All players are an asset to the team but there was one senior player who stands out to his teammates.

“I think Ben Suddeth would be MVP because he has always been consistent when practicing and it shows in the field. He has always shown good sportsmanship, hard work, dedication, and is overall a great leader,” varsity manager Maria Munoz said.

“In my opinion, I think the most valuable player is Ben because not only is he one of the captains but he gives everything in the field and we know we can count on him for everything,” Palacios said.

Villa believes that every effort counts on the field and that brings depth to the team.

“We have had different guys be impactful in different games, we have guys with different skill sets. As far as stats go our leading scores are Isaias Palacios, Moises Morfin, and Jahir Martinez,” Villa said.  “We have great additions to our team this year, Ben Suddeth was voted unanimously for one of the captains. These guys are willing to work hard from each other and everyone knows what they bring whether it’s a starter or a role player and we preach that we need all 21 of them at all times.”

When the team finally lost, they reflected on what they had learned.

“I think we were undefeated in the beginning because we stood humble, but as the season went on we started to let it get to our heads,” senior defense player Alexis Arroyo said.

The team rebounded from the loss and as of Wednesday, the varsity record stands at  13-1-3 with 11 shutouts this season.