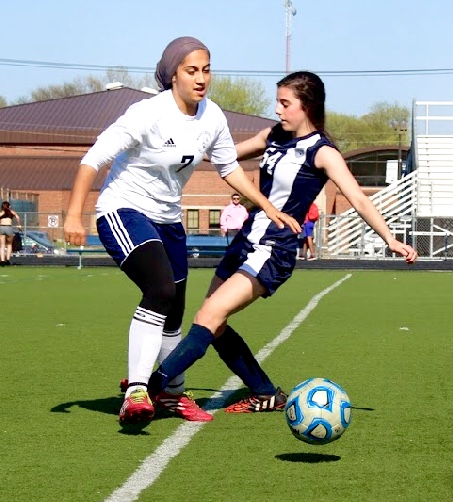 Freshman Maryam Al Kubaisi is a multi-sport athlete that has been playing sports for seven years, ranging from soccer, basketball, and volleyball.

Al Kubaisi plays post (defense) in basketball, soccer as a center back and, volleyball as a spiker.

Now, she moved on from playing at a middle school level to a much more competitive level at the high school.

Adjusting to the different skill levels was a difficult, but meaningful experience.

“Adjusting took a bit of time like meeting the new people and coaches but after you get to know them and get to play, then it is all worth it and it is very fun,” Al Kubaisi said.

“In middle school, I did not have a lot of homework and the work was really easy,” Al Kubaisi said. “But, in high school, I have all honors and an AP (advanced placement) class. It is hard to manage all of it while playing and being a good student.”

Even so, she has managed to get good grades and at the same time be a committed player to her team.

“I think the best tip is to not waste your time on your phone or Netflix, because I do that sometimes and I regret it instantly,” Al Kubaisi said. “Just manage your time as best as you can because you never have enough.”

Although transitioning from middle to high school was a challenge, Al Kubaisi plans on playing sports for next year.

“I plan on practicing on offseason and join other sports during the year to better myself,” Al Kubaisi said.

One way she overcame the difficulty of transitioning from middle school to high school was by being herself.

“Just being me and laughing with my teammates,” Al Kubaisi said. “And trying to learn as much as possible about soccer.”

Al Kubaisi has learned a lot more in her freshman year by being a multi-sport athlete and a good student.

“It is hard being a student athlete but, it can be done and you feel so accomplished when you do well in classes even though you have sports as well,” Al Kubaisi said.

In the end, she’s encouraging others to take her advice and enjoy the high school experience.

“Have fun in high school, meet new people, try new sports, focus on school, and most importantly just do your best at everything you start,” Al Kubaisi said.