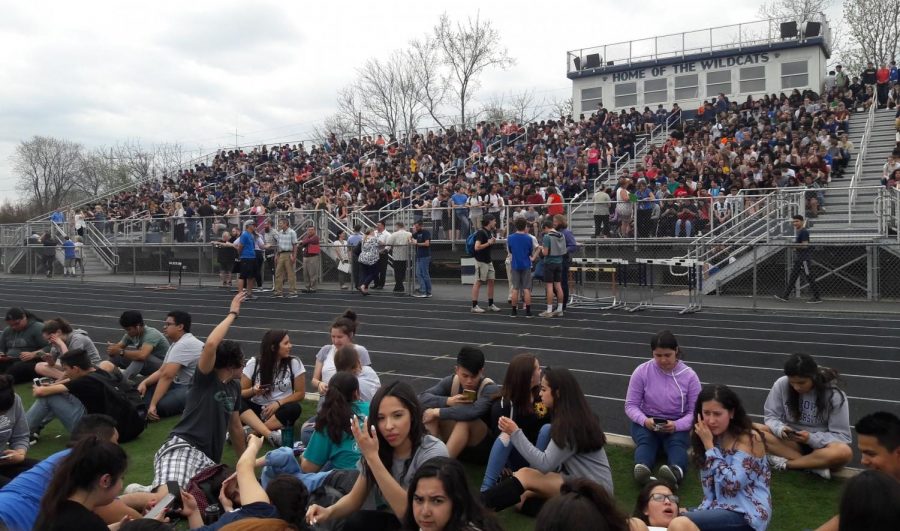 Students waiting on the football field and bleachers for further instructions on Wednesday.

By Mayeli Vivaldo, Editor in chief

Right before ninth hour class began on Wednesday at 1:14 p.m the fire alarm went off.

Students were directed towards the football field and told to wait. No information was provided to students until after an announcement by Principal Moses Cheng was made, leaving many students dumbfounded while they waited.

“I feel very confused. I have no idea what’s going on,” senior Zane Hassan said while he waited on the football field.

After the West Chicago Police Department tweeted that a bomb threat was made towards the school, many students began to worry.

“I’m a little bit nervous and weirded out because you never think that it’ll happen to you, it’s always some other school,” senior Josh Bloomfield said.

After some time of waiting, students were told they were going to be evacuated in order. Students who were taking the bus would be dismissed first, then students who were being picked up, then walkers, and lastly, drivers.

Students who rode the bus were also instructed to leave their backpacks on the football field, causing an uproar in the crowd.

All the students were told after school activities would be canceled and that they, along with staff, were not allowed to go back into the building until Thursday morning.

The order was later rescinded for staff, and staff was allowed to re-enter the building after students had left.

In an email sent to parents Wednesday night, Superintendent Doug Domeracki said the school was cleared and no explosives were found in the school.

“After a bomb threat was received today, local police and fire (departments) completed a search and did not find an explosive device at West Chicago Community High School,” Domeracki said in the email.

Domeracki also said the school will be open Thursday.

“The school has been deemed safe; students and staff may return to school tomorrow,” Domeracki said in the email. “We appreciate everyone’s patience and cooperation as we worked through this situation today.”