108 year drought is finally over for Chicago MLB team 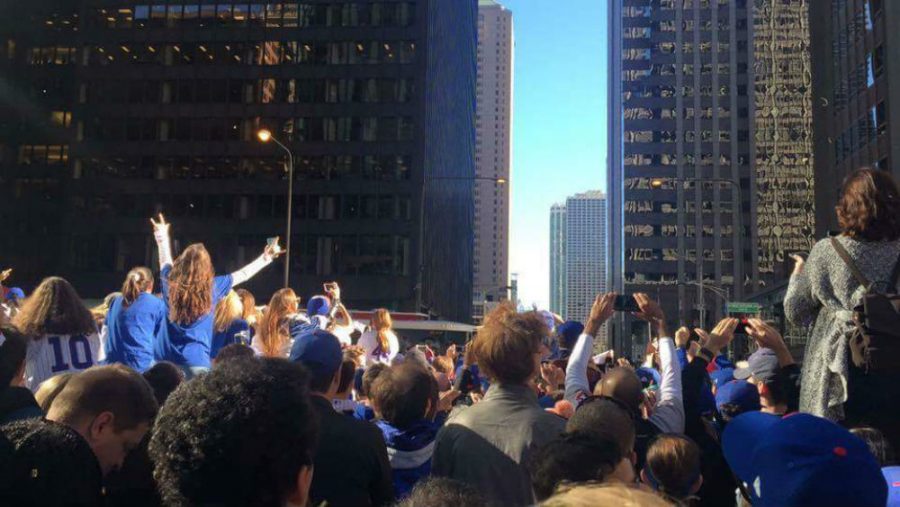 Fans gathered to celebrate the Cub's victory in Chicago

Game 7 of a series in any sport is intense but after a brief rain delay, the 108 year drought is over. The Chicago Cubs are World Series champions!

The Cubs did not take the easy way out after coming back from a 3 to 1 deficit in the series. They completed the comeback with an 8-7 win in 10 innings.

The Cubs took a 3-1 lead in the Eighth but the Cleveland Indians came back to tie the game 6-to 6 after Cubs pitcher Aroldis Chapman made some critical mistakes.

After a scoreless 9th inning, a 17-minute rain delay in the top on the 10th extended the inning with Cubs Kyle Schwarber singling off Indians reliever Bryan Shaw.

The 10th inning started with a single by Cubs Kyle Schwarber. Pinch and runner Albert Almora Jr. took Schwarber’s place at first and advanced to second on a deep fly ball by Cubs Kris Bryant. The Indians then opted to walk Rizzo to set up a potential double play.

The move backfired when Cubs Ben Zobrist hit a double into the left-field corner, scoring Almora to give the Cubs a 7-6 lead. Miguel Montero, the Cubs third catcher of the game, hit a single that scored Rizzo, giving the Cubs an 8 to 7 lead.

Cubs pitcher Carl Edwards Jr. struck out the first two Indians batters in the bottom of the 10th before walking Brandon Guyer, who advanced to second after a defensive mistake. Indians Rajai Davis followed with an RBI single to make the score 8-7 and Cubs manager Joe Maddon lifted Edwards for left-hander Mike Montgomery, who recorded the final out of a generations-long odyssey.