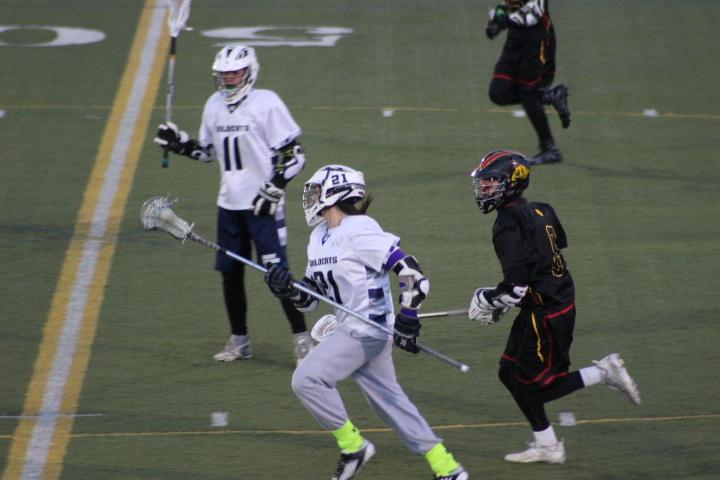 Senior Mason Otzwirk competing in the 4-11 loss to Batavia on April 8.

Hard practice is key for the lacrosse team as they prepare for the 10th annual Sticks and Stones tournament  Saturday and Sunday.

Every year West Chicago hosts Sticks and Stones, a large tournament that is very popular in the lacrosse community. This year marks the tenth year of the tournament.

“It’s one of the biggest in season tournaments in Illinois,” head coach Vince Trombetta said. “It’s a really rich tradition and a very talked about tournament.”

This year the tournament will feature 20 teams including teams from Illinois and Wisconsin.

The history of the tournament adds to its uniqueness. Both of the varsity coaches have played in the Sticks and Stones tournament.

“The tournament started out in St. Charles as Rocks on the Fox and then was transitioned over to West Chicago,” assistant coach Kai Libby said.

“I always love Sticks and Stones,” Babor said. “Even before I was on the high school team, I went there when I was in eighth grade to see how the team was doing.”

The tournament is an event that the players look forward to.

“It’s kind of one of those tournaments where they know what’s coming up,” Trombetta said. “They’re definitely going to get up extra early that day, let’s just say that.”

Team members enjoy both the size of the tournament and the fact that West Chicago hosts it.

“I think we’ll do pretty good at Sticks and Stones,” Babor said. “It’s our home tournament and everyone loves doing it.”

Going into the tournament, Trombetta feels that one of the team’s major strengths is in their overall athleticism but that communication will be an obstacle the team will have to overcome.

In order to prepare for the tournament, the team will be practicing hard.

“We are going to have one game and four practices (this week),” Trombetta said. “We do have a college coach coming out to one of our practices, so that will be big for the guys.”

The tournament will be held at Cornerstone Lakes Park. On Saturday, games will be played from 8:30 a.m. through 5 p.m., Sunday times were unavailable.